POSTED  NOV, 2019.  Home Page HERE
"Elite Publishing," or "Elite Performance Academy," or "Elite funds freedom" or "Elite Publishing." The fact that this organization goes by so many names is a first red flag.  "Elite" was receiving revenues through book sales and seminars and donations despite not being certified as a nonprofit in Florida. They applied for nonprofit only after they were reported. See HERE.
This entity charged up to $5,000 for one to submit a chapter for their books. These books were to be inspirational books with titles such as "Unstoppable" or "Invincible." Though some authors had inspiring stories, many authors had very unremarkable stories to tell. It appears the fee was enough to gain entry into these books.

Sincere and earnest anti trafficking efforts can only begin with a clean and fresh start. In this vein, I offer opinions and judgments on what I believe is worthy of exposure. I am uncomfortable with what I have seen at an “inspirational book” publishing company named the Elite Foundation Inc. They claim to be an anti sex trafficking organization but I believe that this cause is tangential to their ultimate goal which is to give the appearance that they are a successful book publishing company.

The LEGITIMATE NONPROFITS - and the trafficked victims they attempt to rescue and heal - are financially harmed as scarce donation money is directed (unwittingly) to the wrong entities. This includes those that run scams, those that don’t properly report financials, and those that are not registered as a nonprofit while claiming to be. Elite Foundation Inc appears to meet all of these criteria. They call themselves a “503” instead of the legitimate 501(C)(3) which I find deceprice. They clearly are a for profit workshop / book publishing company that brings in significant revenues. To cite one example of over-the-top excess, if you scroll down to the very last diagram below, you can understand the unwarranted revenues they are capable of generating . VIP TICKETS were offered for sale at a staggering  $40,500.

FRAUD IS PERHAPS ONE OF THE SIMPLEST LEGAL TERMS TO UNDERSTAND. FRAUD IS INTENTIONAL DECEPTION FOR FINANCIAL GAIN. It is making money while lying. I would not have paid $2500 if I knew that none of their books reach bestseller status based on how a reasonable person would define bestseller.

My years in business and finance have provided me with a proficiency adept at vetting business models. I use this skill set to review / assess predatory trafficking models. Some, like the New Beginnings trafficking ring, have been ingenious (all the info is in my blog). Yet I cracked their code and they at least have fled from their $1.6 million mansion. This was a significant find in that this revelation began the tipping of the dominos. Knavish, surreptitious, and profiteering charities can go under-publicized for a long time (Epstein). They are protected by the notion that many crimes are "too big (and too crazy) to believe." Nevertheless, persistence is mandatory so tevelstions can occur.

I was once a fan and part of “Elite Foundation, Inc” until my conscience forced me terminate dealings with them. I was rebuffed when I clearly asked them (more than once) to do the right thing. I left on my own terms. My authored chapter remains in the book UNSTOPPABLE against my wishes. I want no part of a scam and I DO NOT take credit for being a bestselling author.

I am of the opinion that the Elite publishing scam looks something like this...

1) Many authors pay around $2,500 (exactly what I paid) to write a chapter for one on their books (alleged “inspirational” books).

2) Authors are eager to be part of a “best selling” book since all of the previous books carried the false claim that they too were “bestsellers.”

3) “Crowd buying” takes place the day of a book launch. The book is an anthology (collection of works) and there is a call for the 15-20 authors to contact family and friends to download (Kindle) the book "mob style.”

4) The book was offered at a giveaway price so anyone could afford it. The goal was to create a temporary sales boom.

5) This “crowd buying" frenzy temporarily spiked the book sales on the Amazon ranking list to reach number one in many categories.

6) The rigging and the correlated spike in sales do not represent what a reasonable person would consider to be a bestseller. It is a scam.

7)  The scam is brightly exposed months later when the Amazon sales rank (on the book I contributed to... called UNSTOPPABLE) fell to 2.68 million! Yes. 2.68 million! See proof below.

8)  Additionally, many of the authors (contributors to the anthology) have led “garden variety” lives with life hurdles we all experience. The book is to highlight those who are inspired “over-comers" and the book falls well short.

9) During the time I spent with “Elite,” I never witnessed an actual trafficking victim being helped. They did hold one workshop with a legitimate group from Miami. In addition a book was written for a victim, but in my opinion, she was taken advantage of when “Elite” printed “international best seller” on the cover as the book slid to an Amazon sales rank of 1.3 million. Charging many of the authors for their stories and receiving book revenues makes “Elite” a for profit business.

Some contributing authors, emotionally elevated by their perceived (but bogus) achievement, could not resist the temptation to hold “personal workshops” using the falsified “bestseller” claim as a drawing card. This is a dishonest business practice. Yet vulnerable people were blinded by their ambition to become “inspirational speakers.” NOT EVERYONE CAN BECOME AN INSPIRATIONAL SPEAKER.

Unreported revenue sources from which taxes were not likely include:

- Donations received from a donation button on their site.

- Fees received from authors who submitted chapters in the books. I paid $2500 for a book about which it’s success was grossly overinflated.

- Elite received revenues generated from the actual sales on Amazon (despite a pie-in-the-sky price of $28.99.) There’s a sucker born every minute.

- The asking prices for VIP seats at their fundraisers was as high as $10,000. Remember, nothing here is likely being reported to the IRS. I never saw a link between cash revenue and real life victims. The total "ask" for seats was $40,500 (see last attachment).

- Elite rented space to vendors at their fundraisers where people could peddle their wares. There were also speakers who gave short presentations in “break out” rooms whom I believe had to pay for their spots. The one young lady I listened to had less than a year sobriety / clean time. This is NOT someone ready for the “inspirational speaking” but “Elite” has them speak anyway.


If the “best selling” claims are true then the owners of “Elite” would be public figures.

I next provide explanatory attachments which illuminate my statements above. 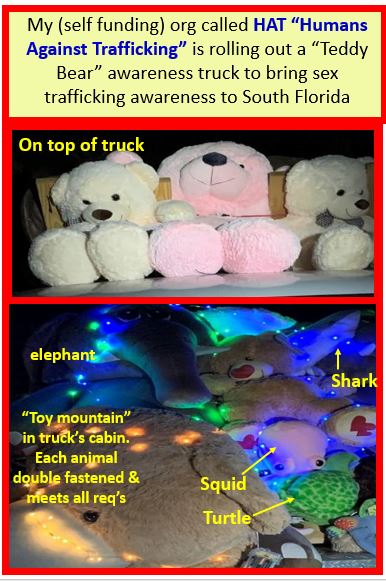 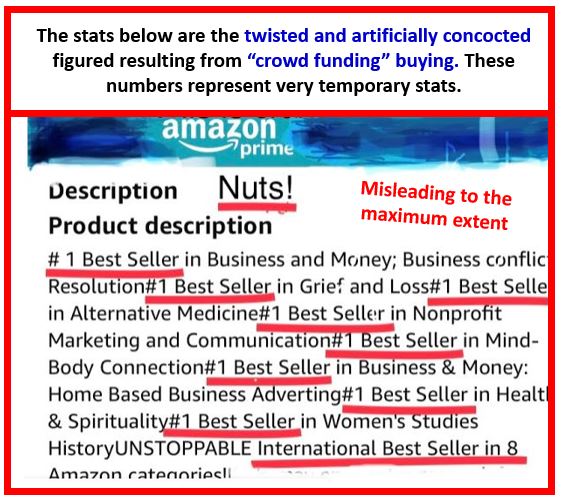 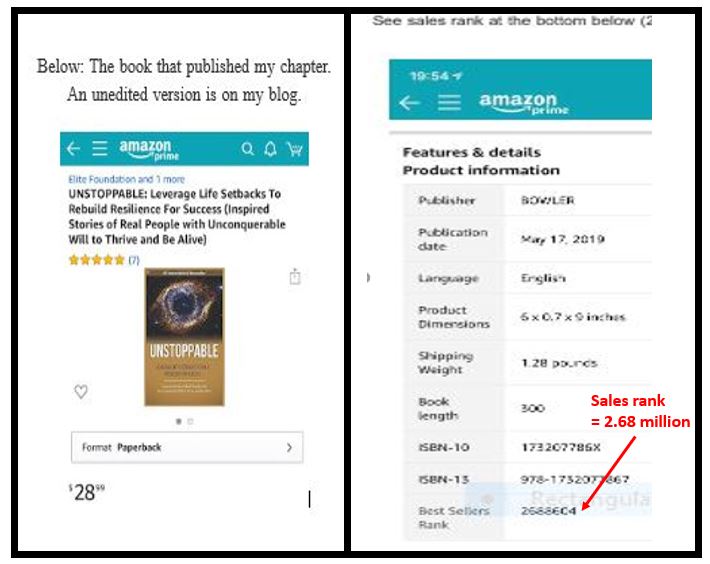 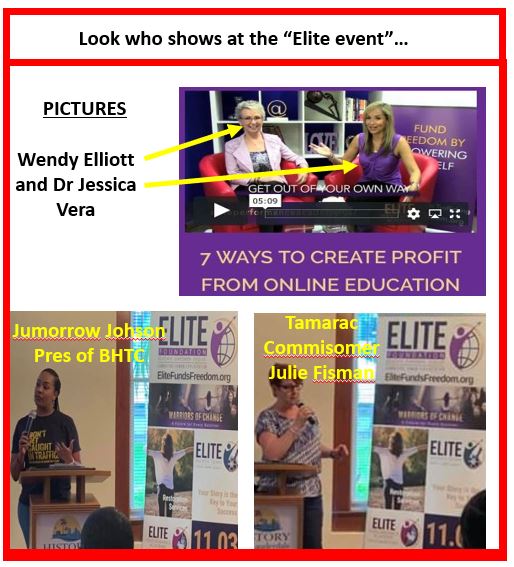 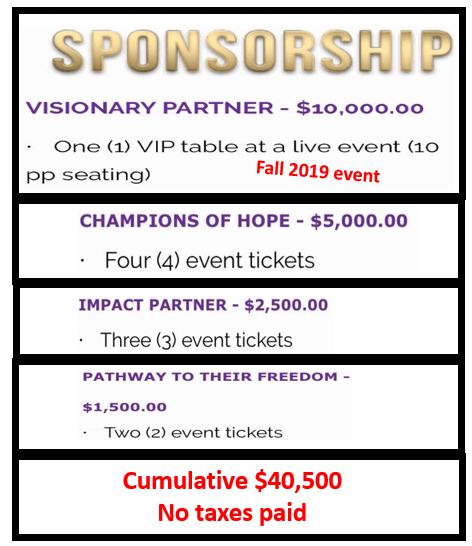