XIAOQI WANG, a Boca Raton resident, works(ed) at the "Asian Voice" and has the highest of political connections. She is one of approximately 13 VIP's/ lobbyists for the Chinese government. Wang has ties to at least two Communist organizations. Her advocacy and interests are for the Chinese sex slave parlors to grow as an industry which she claims is a key industry for South Florida. I attempt to write this missive in an apolitical way but at some points this was unavoidable. 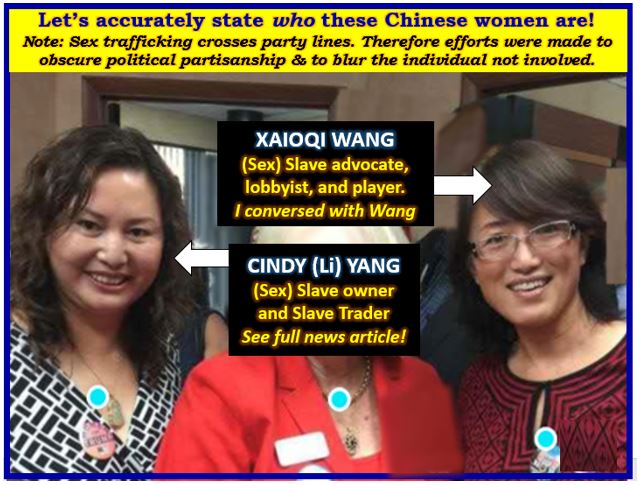 This story leads to Mara Lago. I had no idea where this road would lead when Xiaoqi Wang sent me a FB message out of the clear blue. THIS IS NOT A POLITICAL POST. I would not be an anti-sex trafficking activists if it were not for Broward County which leans 2:1 to the Democrats and their "friend to sex traffickers" Scott Israel who allowed sex trafficking run wild.


Below is a word for "word for word" copy of a "text string" I participated in with Xaoiqi Wang on Tuesday 01/07/20. I was shocked by her candor. Within the Asian massage parlor industry, she clearly depicts the existence of sex slaves in South Florida. Her numbing indifference to the plight of the sex slaves is stunning. Her only concern is money and the industry's "health."

A SOLUTION - RIGHT HERE!!  ICE can - or be equipped to - raid massage parlors and ask for legal documents of these sex slaves. Suspicion abounds both within these parlors and with all venues of trafficking. THE DETAINMENT of the slaves equals THEIR FREEDOM. Think about it.

Once detained the Chinese victims would not and legally could not ever be returned to their slave owners. Safe harbor laws would protect these trafficked slaves for 90 days where thoughtful choices can be made. Force, coercion, and fraud (elements of trafficking) are clearly present within Wang's words and can be imparted on all forms of sex trafficking. Traffickers can, could, and should be arrested.  Raids would also place an icy chill on this massage slave trade leading to voluntary closures as traffickers would greatly fear thst "they could be next."

- PLEASE... NO MORE 2 YEAR INVESTIGATIONS WHILE
THOUSANDS OF RAPES OCCUR. WHAT GOOD IS THAT? HOW CAN WE CELEBRATE THESE ARRESTS AFTER THE VICTIMS HAVE BEEN DESTROYED AT ALL LEVELS?

- FORCE, COERCION, and FRAUD EXIST FOR THOSE OVER 18 AS WELL. RAPES ARE RAPES. SYSTEMATIC RAPES COUNT AS SERIAL RAPES.

Why is the 18 year old demarcation important for investigating the trafficking of minors in some jurisdictions - and not in others? This makes no sense. Law enforcement, I hope, regardless of victim age, would be able to look a sex slave in the eye and state, “We did all we could as fast as possible.”

In my opinion, failure to move “Heaven and Earth” to free slaves in the year 2020 is callous, derelict, inhumane, and inexcusable. We are talking about the worst crime of humanity. These are daughters and neices, cousins and thoe without families.

I provide a clear method to free these slaves using ICE. Consider the resources and potential: ICE had the ability to clear out a Mississippi factory of 700 illegal workers in a single day (Koch Foods Chicken Processing plant). ICE can begin to clean out these massage parlors one at a time and 4-5 sex slaves at a time. There is no excuse for inaction.

Survivors - in a single dorm filled with "birds of a feather" (community of survivors) would be infinitely better than being aonsigned to sex slavery. Physical protection and emotional support (in their native tongues) would bring on am immedite result. Think of the intellignce and key information gleabed from th thr Physical protection and emotional support (with native tongues) is an immediate "beginning result." Think of the intelligence and information to be gleaned from a community of survivors who begin to feel safe.

This is so achievable that I want "to shout from the roof tops." We are talking about sex slavery, slave ownership, and slave trading in its fullest form. The ONLY impediment is a lack of will, a lack of care, and a profound lack of sympathy. Forgive me for being so blunt.


Below I provide the text string between me and Xiaoqi Wang (01/07/20) as well as the sex trafficking and "influence buying" activities of Cindy (Li) Yang of Boca Raton. See links to News articles and pictures below.

Here is the TEXT STRING... 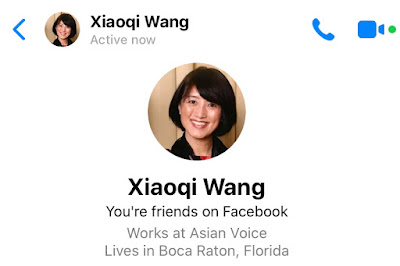 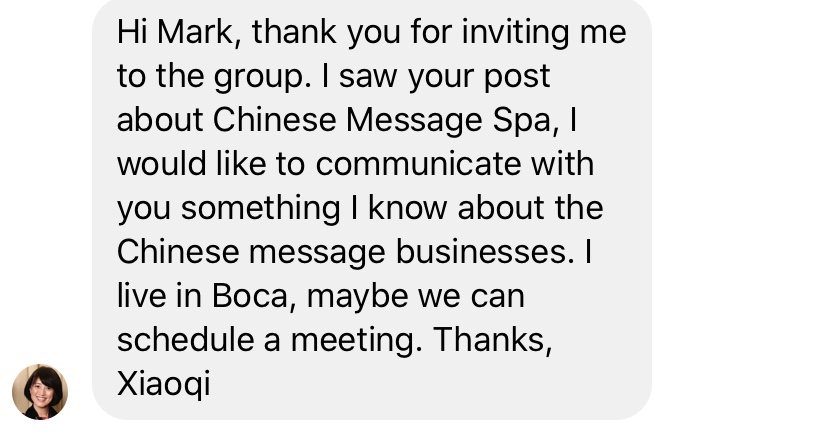 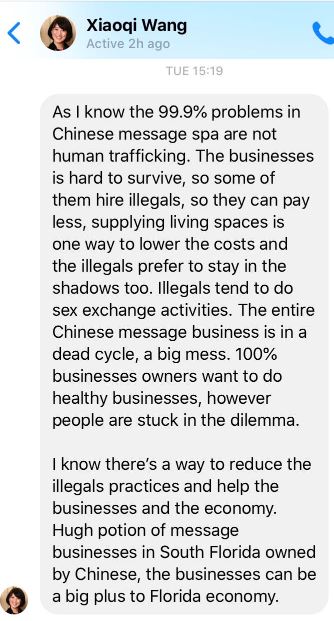 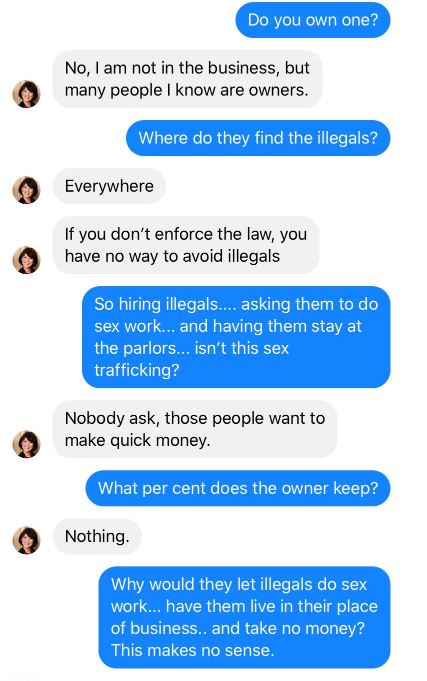 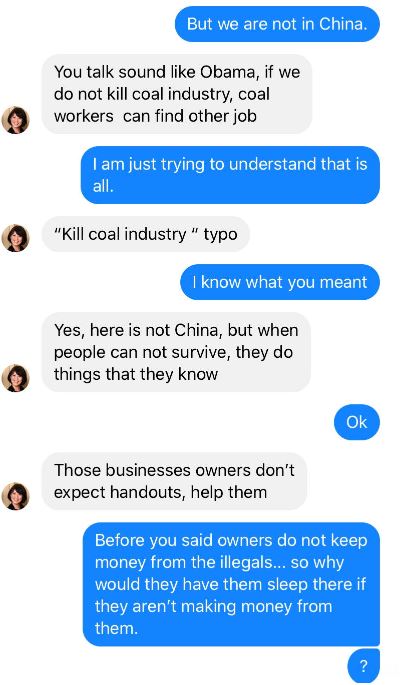 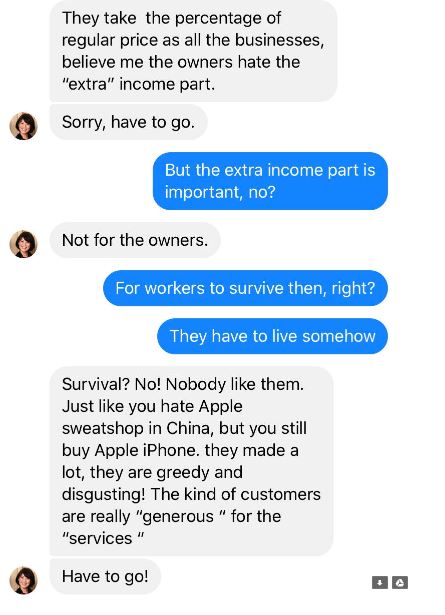 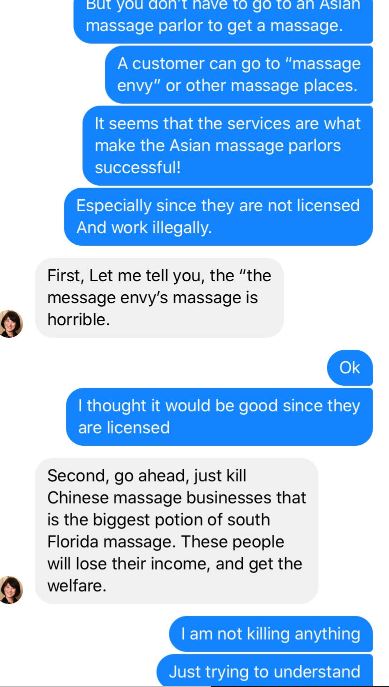 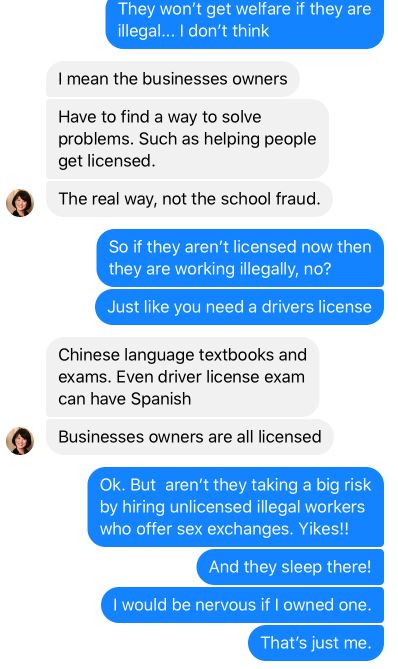 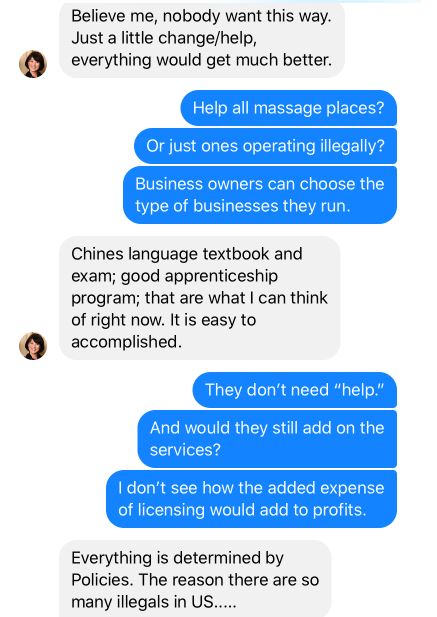 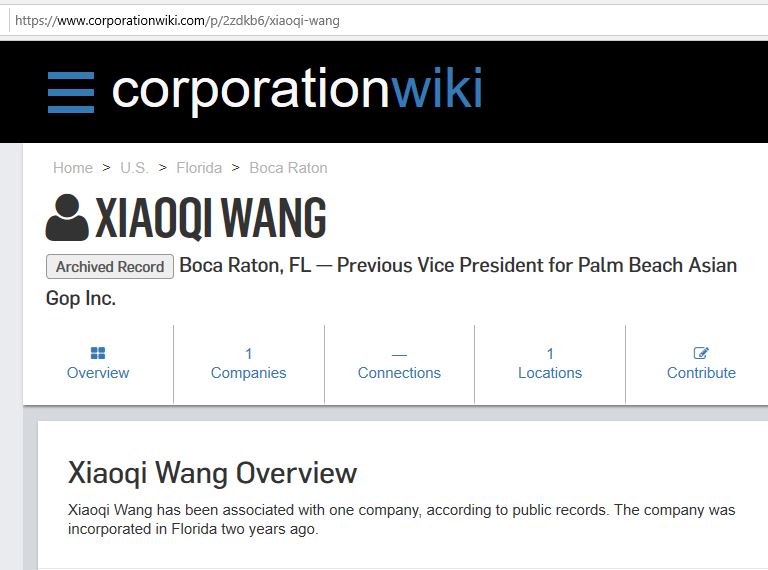 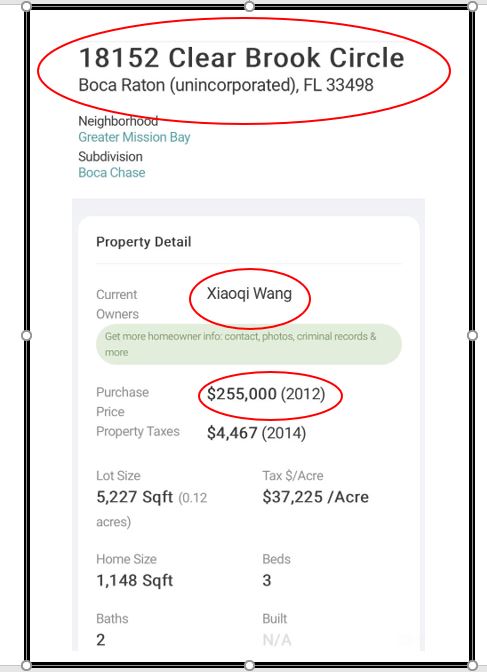 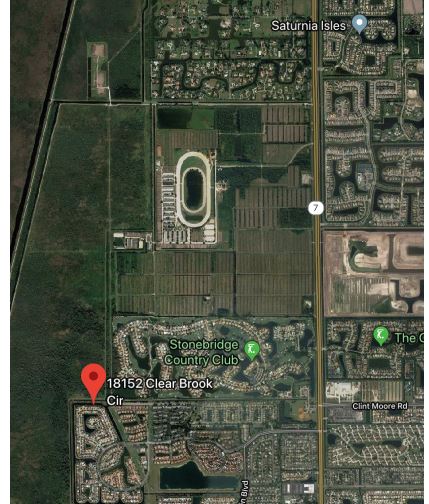 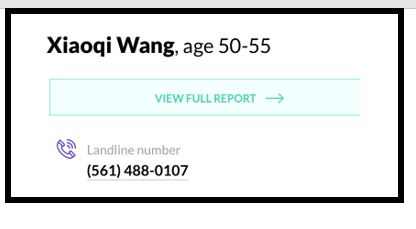 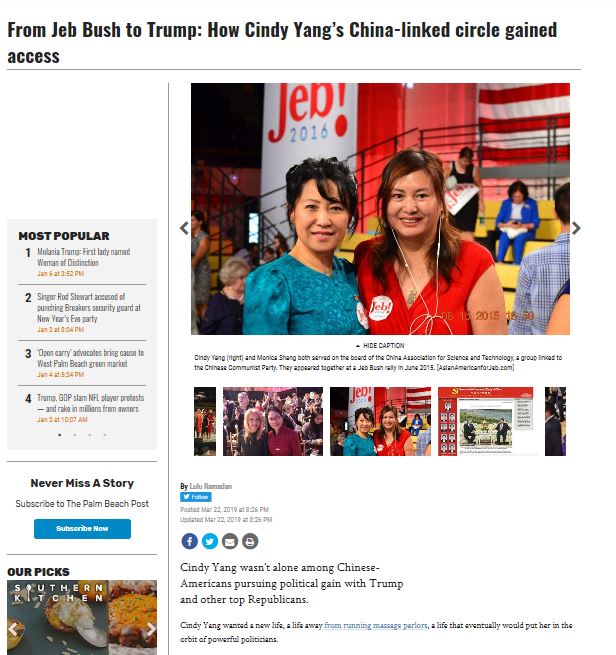 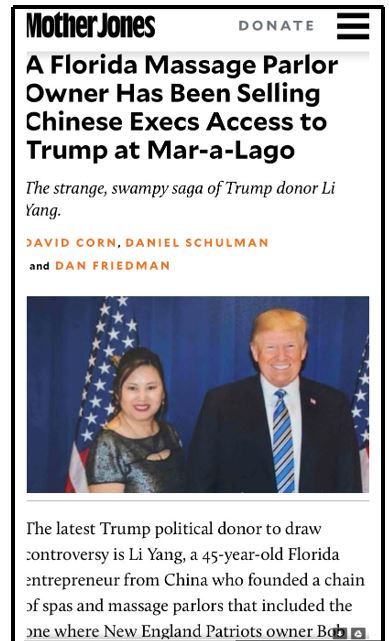 Cindy Wang's attorney was (still is?) Evan Turk who is a FB friend of mine which I found interesting. His wife (Karyn Turk) was Mrs. Florida in 2016 (also a FB friend). An interesting couple. Certainly aligned in their beliefs. I posted some of their FB pictures because I found them interesting as a "Who's Who." There is no suggestion in any way, shape, or form that either person condones the actions of sex trafficking nor anyone associated with it. Sex trafficking is an issue far greater than political leanings. 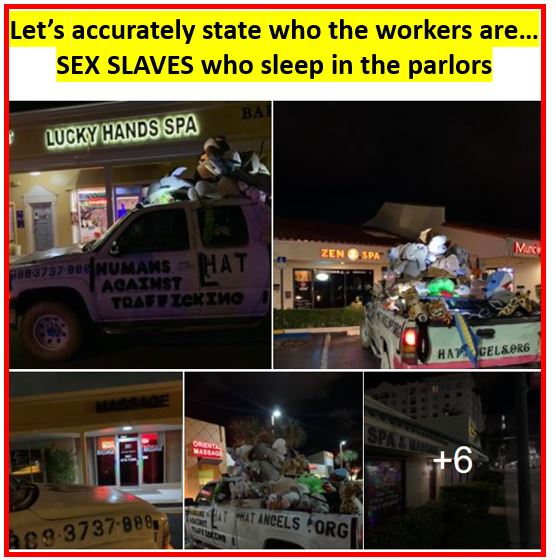 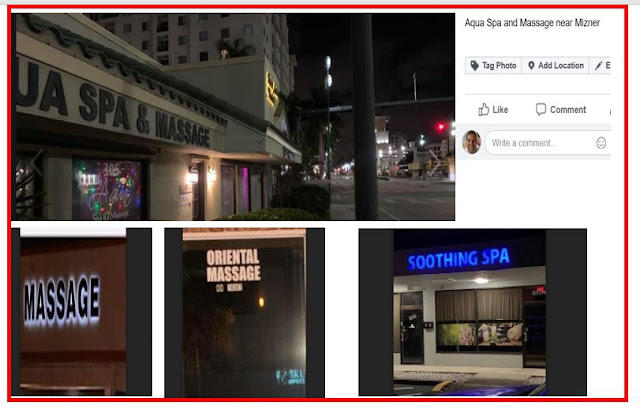 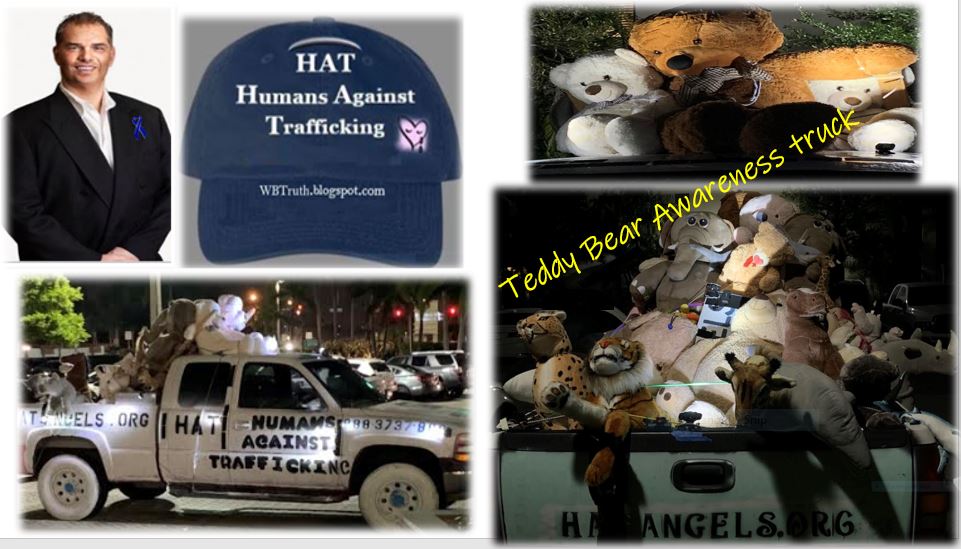