Louis Elmy and Stefanie Salavantis and their corrupt brethren

This county has three major industries: Corruption, Corrections, and Heroin. We cannot continue to look the other way regarding…
1)    Chronic alcoholism of figures like WB Chief Gerard Dessoye, Mayor Tom Leighton, and Magistrate Marty Kane (now seen drinking in the morning). We should not have to put up with this. Refuse help? You are fired.
2)   Corruption within the DA office from Salavantis who
-     Hired a Kids for Cash attorney Sam Sanguedolce  (it’s true) as the Head Assistant.
-     Mocks “Michaels law” by throwing out a DUI from a person represented by Sanguedolce’s law firm. No reason given.
-     Finds no crime whatsoever – not even malfeasance – with 67,000 gallons of missing city gas.
3)   Nepotism. Louis Elmy belongs in jail for the way he has hurt our area. He has completely dumbed down and watered down the WB School District. We will never complete nationally for quality companies with the harm of the above people. And there are many others.

All in the "Elmy",,, Public money supporting a family tree.

* Louis Elmy: He works for the  Luzerne County Prison.

* This sister is  married to Jim Height: He was  charged for accepting $2,000 in cash for support he provided to a contractor regarding the Wilkes-Barre Area School District.

* Another sister: Renee Post is married to James Post who is the Purchasing  agent for Wilkes-Barre  city schools.

*  Kevin Elmy’s wife: She works at the courthouse.

From Times leader editorial (June 17 2015). A similar editorial was written 2 years ago by the TL...

Give credit to Wilkes-Barre Area School Board Vice President Louis Elmy for his persistence — as in, how he persists in blatantly ignoring calls for this embarrassing board to embrace higher standards of conduct.

Elmy’s wife, who works for the school district, recently received a new job title and salary. A majority of the nine-member board voted this month to move Sandy Elmy from teacher’s aide, a part-time post she held for several years, to Kistler Elementary School secretary. Presumably that makes her eligible for health care and other benefits.

Her hubby had publicly supported a failed attempt last year to get Sandy Elmy an upgrade in her capacity as teacher’s aide. Not to be overlooked, board member Robert Corcoran lobbied hard at that August 2012 meeting for his wife to get an upgrade, too. Each man abstained from voting for his own beloved but voted yes for the other man’s wife. Due to the abstentions, those efforts were mired in a 4-4 tie.

Fourteen months later, the votes finally swung in favor of the Elmys.

This situation might seem less despicable if it were an isolated case during another era in an otherwise upstanding school district. But this is 2013 in Wilkes-Barre Area — Luzerne County’s most corruption-tainted district, widely considered to be a place that historically has employed people by following a strategy that sounds as if it was borrowed straight from a cellphone plan: strictly “friends and family.” Bribes also have been used to secure teaching jobs here.

This urban, public school district had no written teacher hiring policy until last year. Its board only drafted a written policy, begrudgingly it seemed, following the high-profile guilty pleas in 2009 and 2010 of a handful of then-current and former board members who had engaged in passing bribes involving would-be teachers or business owners seeking contracts with the district.

No sooner was the new policy in place, however, than the board majority began to soften it.

Today, as has been the case with prior versions of this board, certain members bravely call for progressive changes. But the controlling clique perpetually clings to the past, stonewalling most reforms.

Voters should keep that in mind next month when selecting candidates for open board seats. Quiz candidates concerning their beliefs about serving as a board member of a publicly funded institution: Would they dare run for the office if a relative already worked there? Would they remove themselves from the post, not just abstain from certain sensitive votes, if a relative were to seek employment there?

To be clear, Louis Elmy runs afoul of no law by serving on the board.

And, Sandy Elmy might make a super secretary. Apologists will say she should not be treated any differently — or have perceptions of her performance tainted — because her husband helps to oversee and guide the school district’s operations.

And they’re right. She deserves to be judged entirely based on her merits.

Which means her husband should not be serving on this school board — the very body that most likely will be voting soon on a newly negotiated contract involving school secretaries’ salaries.

He should resign before that vote.

Observer of the obvious • 3 hours ago
Maybe the STATE legislature should get involved and make some laws against it...the state provides monies...they have a vested interest...time to put a stop to it...it's like incest

Guest • 7 hours ago
Kudos to the TL for calling them out!

Guest • 9 hours ago
They will drag their feet forever on a no-nepotism policy. I believe that they run for these positions just to gain the ability to manipulate the hirings.

truth! • 9 hours ago
what the papers and reporters forgot to put in the view of the public eye is Stella had worked there for 2 years as a substitute janitor and worked her way up to the full time position... In all honesty....it would be discrimination if she didn't get the promotion since she was the only person who applied of who all ready worked there......again lack of investigation on their behalf just to make another school director look bad !!!!! SHAME SHAME

Deb Payson  truth! • 9 hours ago
I agree that full disclosure should be made with an article like this. Share all the facts. People have a right to know. Then focus and energies could be put where most needed. If they really want what is best for this community than the media would do their do the due diligence in a manner that is more respectful to their Community.

Deb Payson • 10 hours ago
Imagine...you are only hearing about those people who are related. Look at the last few hires, closely. "Special friends" get jobs also. As Mr Elmy said on social media this week " I did nothing but help people who were out of work and needed to pay their bills. "

Remy Martin • 10 hours ago
Need to federally indict more of them. What other organization locally has had so many of their members arrested for nonsense like this?

LilyODaValley • 11 hours ago
The saddest part about reading these comments is knowing that after a few days have passed, all of this will be forgotten. No "new" folks will attend a WB Area School Board meeting, folks will continue to avoid the CTC like the plague, and the hoopla will subside until the next revelation of nepotism/spending/corruption/etc. makes the news. Wake up people, take control back instead of allowing the people YOU elected to make poor decisions. Oh, YOU didn't vote in the last election (the one where the WB mayor was practically sworn in with 3,000 votes)? Then SHUT UP and take your medicine.

Deb Payson  LilyODaValley • 9 hours ago
The candidates do not want everyone showing up to vote.

Deb Payson  Sukiyomo • 9 hours ago
Many, many people would love to have a job today. Any job.

kasyyy • 15 hours ago
Absolutely positively NO relatives - hired , nominated, considered , allowed to apply - etc etc etc - period.
o    •
DaMan • 16 hours ago
If the media did its job, they would learn just how many jobs the Elmy family hold that are fed at the public BBQ.

marathonrunnerchris • 16 hours ago
Amen! Not only is nepotism a problem in the WB Schools hiring process, there are also teachers who body-slam children, and one elementary teacher who was featured in a "questionable" lingerie video and then went on to be featured in a reality television show where she was shamelessly trying to get engaged to a wealthy man (while being on a "leave of absence" from the school). The list could go on and on. However, student achievement is plummeting and the test scores prove that scholastics aren't the primary focus of the schools. The problems are numerous. How does GAR High School allow the academic atmosphere to get so bad that they assign teachers to be fight diffusers? The School Board needs to fix many things in the district.....including the hiring policy.
·        Deb Payson  marathonrunnerchris • 9 hours ago
School Board and School Superintendent. Who is responsible for what? Perhaps that is a part of the bigger picture? The superintendent is responsible for administering an annual budget of more than $102 million and overseeing roughly 575 employees. According to a CV article on August 28, 2013 yet in April 2013 Only months after landing the job, Wilkes-Barre Area School District Superintendent Bernard Prevuznak announced he is leaving the position for family reasons and returning to the position of deputy superintendent. How many times did this flip flop? The board hired Prevuznak for the permanent job last November, but a contract was never finalized. In April, Prevuznak said he wanted to return to his old role as deputy superintendent and continue to head the district until the board could agree on a permanent replacement.
After Tuesday's meeting, Prevuznak, 55, said board members asked him to reconsider after "negotiations for the other candidates" failed to result in an agreement for a new chief.
"During that time since I made that announcement in April, I have had many administrators, teachers, stakeholders in this district come at me and asked me to reconsider," the Plains Township resident added. "They felt I was the choice that they wanted too as well, and some other personal issues in my personal life have been resolved."
After the vote to appoint Prevuznak as superintendent for the next three years, the board unanimously approved a motion from board member Louis Elmy to save money by not hiring a deputy superintendent.

Aggie95  marathonrunnerchris • 13 hours ago
well maybe that kid got body slammed because they need fight diffusers at GAR ..... 2 kids have been badly hurt by machete attacks over the last couple of years and a lot of those kids are out of OKT or Sherman hills ..... you figure it out

marathonrunnerchris  Aggie95 • 11 hours ago
What is the purpose of having Resource Officers at the schools when classroom teachers are assigned to be fight diffusers and body-slam children?. Are the Resource Officers not doing their jobs properly? You tell me...... 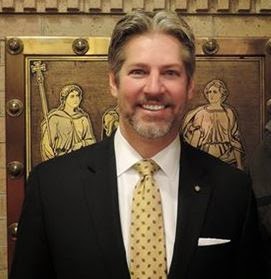