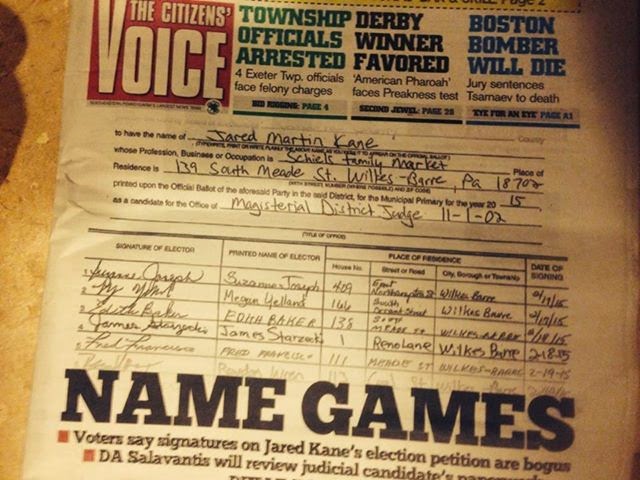 1) Apparently, sources say,  Jared Kane has had 3 DUI's and two were thrown out. He blew a mind blowing .267 on the one. he hit two parked cars... a block apart. Question? Who believes a Magistrate should be charged with murder if they throw out a DUI and that person kills someone?

2) Very good word tells me at least three parties will be filing private criminal complaints against Jared Kane for forgery on Monday. PEOPLE ARE IRATE THAT THEIR NAMES WERE FORGED.

3) Confidence in our District Attorney to act on this matter remains very low. One resident commented that Stefanie Salavantis is official property of "Kings and Queens" of Wilkes-Barre... Leightons, Kanes, Dessoyes, Braces, and Judd Shoval. .

4)  Below is posted part of a legal document. Imprisoned "Kids for Cash" Judge Conahandid a favor for his alcoholic buddy Marty Kane. Conahan gave Jared Kane a job. The post below explains that spoiled brat Jared Kane showed up "sometimes" and when he did he was drunk. (Sorry for the gap between the 2 pages). 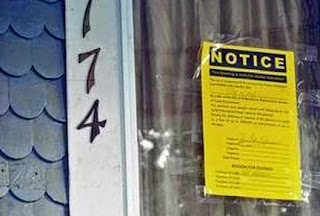 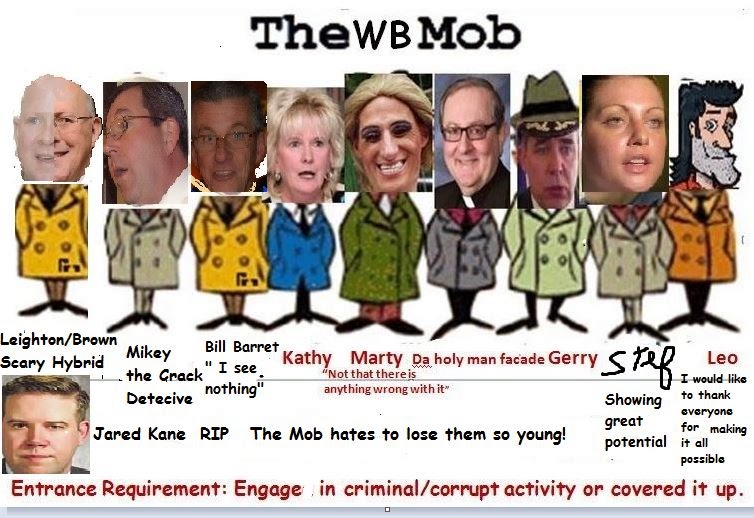 Redemption award: Most of WBPD who carry on in one of the most dangerous cities in the nation and have not resorted to violence (as seen in other cities). They also have to work under a corrupt Mayor.

JARED KANE:
1) FORGERY: DA Salavantis should press charges immediately as we have many people who claimed not to have signed the petition (whose names were on).
2) PERJURY: Jared Kane lied to the notary when he stated that all signatures were valid "under penalty of perjury." Word has it his notary is also his Treasurer. This is too much.

The legal aspects:
1) This case in New York is similar to Jared Kane's fraud. This man spent weekends in jail.   Link HERE

2) Forgery is to be elevated to a felony of the third degree if the writing purports to be a will, a dead… or other document evidencing, creating, transferring, altering, terminating, or otherwise affecting legal relations. Link HERE

COMMENTS FROM ACROSS THE COUNTY:

"This will also be the end to Salavantis if she let's this one slide too. The public is watching and you're definitely not going to let this one go."

"Pure scam. And this pathetic little political hack most likely going to win. 89,000 per year. - 6 year term. Over half million for the little scammer. Forged signatures and this kid might be wearing a justice robe. This is truly underhanded scam. >. This is criminal.. WB voters. - Do not vote for this fraud and poor excuse for a person."

"This is the ultimate in regards to a persons character. Does this really surprise anyone? DUI's, fired from state and county positions....."

"Stephanie (Salavantis), darling, all eyes are on you. It will be interesting to see when and how your coaches are going to strategize the plays for this one. If it weren't so dangerous, it would be absolutely hysterical."

"A wanna-be magistrate who lives with his parents at the age of 33? And you are going to judge people before you? Seriously?"

“Salavantis, do your job. This is crystal clear. These people said the signatures are not theirs. Kane himself signed as the circulator of the petition. Boom. Guilty. Let's see how you get out of this one, Missy DA.”

"We are just about to see how corrupt luzerne county is !! The corrupt Kane family will win this election by what ever means necessary !!! Plus having supported DASalaventis in her race against DA Musto Carrol will pay dividends for them !!! Salaventis will put this invitation in the political friends and family file along with Judge Gartley and all the attorneys that were OVER BILLING HE COURT WITH HER PERMISSION !! This county will never change it so sad!!!"

"Kane is such a horrible liar. He's one of the biggest disgraces ever to fall on this ballot. His day will come for sure for this. You think your name will save you? Haha!!"

Master plan? Like what?!? How can he relate to people that have jobs, families and responsibilities? He still lives at home with mommy and daddy. Cut us a break already!
How about, "Kane needs a job sucking of the public teat for the rest of his life?" This name-recognition nepotism needs to end...NOW! The Kiddie-Kane looser needs to go bye-bye.
I will say this again:

"Unbelievable!!!!! Now it's in the hands of Salavantis. Don't worry, Kanes. She'll never take any action. Maybe she'll claim he had no policies or procedures in place so he can't be prosecuted. Oh wait. That was Gasgate. Oh, I know. She'll let Kane hire his own investigator. Oh no. That was Gartleygate a/k/a Stevensgate. This should be good."

- Jared Kane owes at least $40,000 to contributors for election fraud.

- Once again, Stefanie Salavantis editorializes for the corrupt saying she is "mindful of the election timing." Note to Stefanie: Please zip it and do your job.

From B Kalinowski of Citizen's Voice)  Terri Bonn-Smith, (#10) one of the five people who told The Citizens’ Voice she did not sign the petition, said she was shocked to see her name on the petition and that she was “angry” over the matter.
“I take my signature very seriously,” said Bonn-Smith, who lives at 262 E. Northampton St. and owns a salon next door,
Bonn-Smith noted that the petition had her name printed in reverse as “Smith-Bonn.” After being shown the petition, which also included her husband’s name, she called him. He said he didn’t sign it either. “That’s bogus,” Sean Smith (#11) said of the signature.
Bonn-Smith said no one approached her about signing a petition for Kane, and even if they had, she would not have signed it.
“I don’t know who he is, so absolutely not,” she said.
Three others — Tara Tesar (#36) , of 105 Rees St., Elizabeth J. Harris (#54), of 130 S. Meade St., and Sara Klinges (#39) of 161 S. Grant St. — told The Citizens’ Voice the signatures in Kane’s petition are not theirs.
“That’s not even close to my signature,” Klinges said.