THE FINANCIALS OF SHAM NON-PROFITS

- BHTC meets a total of 8 hours per year besides the workshop they put on once per year at the Court House where attorneys receive CLE credits to help fill the room. (estimated revenues for this Power Point presentation = 425 times $40 = $17,000 plus sponsors... so... where is this money?)

- Nearly 100 per cent of survivors call these "awareness campaigns" a scam. The money does not reach the victims. There is no verification that a victim / survivor has received a penny.

- Google or YouTube provides all of the information you will ever need regarding sex trafficking. Stay home. "Awareness workshops" are superfluous and tend to make money only for the presenters. (a caveat: bringing awareness campaigns to children in schools is very valuable.)

- Thee BHTC "action committees" should be labeled as "INACTION COMMITEES." They also rarely meet. One meeting may include a speaker unrelated to sex trafficking.
- One group is for law enforcement only. The incongruity of this borders on satire. Law enforcement has essentially surrendered their efforts in finding and arresting both traffickers and the johns (buyers).
- For many more details regarding BHTC please go HERE

(2) The scam called the Covenant House of Fort Lauderdale
- The manager (Nelson Bogren) of the Ft Lauderdale Covenant House is the principal agent and Treasurer listed for the Broward Human Trafficking Coalition.
- "Cross breeding" between phony non-profits is very common and produces fruitful networking conduits. For example, one non-profit could take in a victim from the street and place them at a "safe house" where they can be sold for money.
- The Covenant House is considered unsafe based on many legitimate sources. The most appalling anecdote I heard was that they rent out residents to pimps in order to bring in cash (that they pocket like any pimp would).
- I was recently at a south Florida anti trafficking conference (approximately 45 people). When it came time, as a group, to list legitimate safe houses – the Covenant House was never mentioned.

- The fact that any "mind space" or funding is directed to sham non-profits has deleterious effects. Potential donors will give less money to the healthy non-profits because the donors will have little capacity to separate the sham non-profits from those that are clean.
- Truth be told... the owners/ managers of the phony non-profits should be convicted for theft and other applicable crimes.
Here are comments made by a resident: 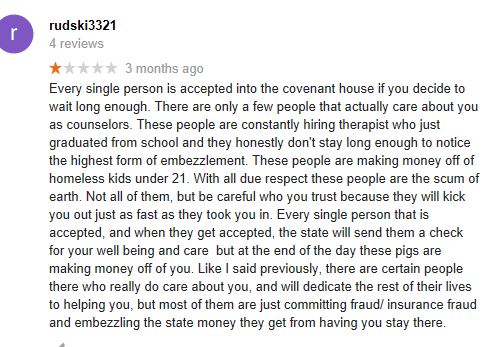 (4) The scam called PHANTOM RESCUE in Pompano Beach
-  See financial home page HERE
-  It is a one-person team (Tony Sparks) with just two board members.
-  Tony Sparks does not have offices in Malta and Australia.
-  Documented rescues = ZERO
-  Tony Sparks has not visited 700 countries. This is part as part of this scam.
- He paid $50 k to a charity and was placed on their Board same year in 2016
(Note: I am not naming the charity because their facts suggest legitimacy and integrity).


1) Their crisis number is dead.

Phantom Rescue has no legitimate sponsors after 11 years.

4) Tony Sparks calls himself an "elite emergency force" as if they play out a theme to a kids' adventure movie. A force? There is just one person!

5) Yet at the same time he says that they are not a replacement for law enforcement. So what exactly are they?

6) I have asked their manager Tony Sparks to contact me multiple times and he has NEVER CONTACTED ME. This us the same treatment I received from the Broward human trafficking Coalition (BHTC). The illegitimate orgs run from me. The legitimate ones embrace me.

7) The video on their web site is pure nonsense. It looks a an ad for the Navy Seals.

8) Under "press" there is NO press coverage!


9) He shows an award from the "Office Depot Foundation." This is a charity that takes in money. They don't hand out trophies to others.

10) He shows a colorful TV-like screen on the side of a NYC building. It is obvious it was photo shopped.

11) One of their sponsors is McLean Hospital.. a psychiatric hospital in Massachusetts (WTF?)

13) There is no names listed on web site.

14) There is no governing board