DON'T LET LAW ENFORCEMENT GET AWAY WITH LIES

Words from Salavantis and Hazleton Mayor aint worth ---- 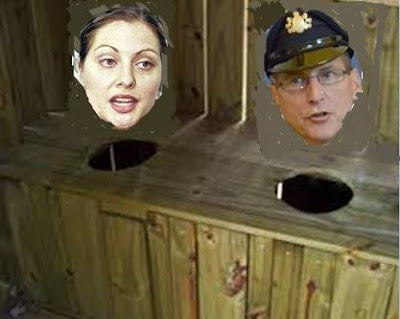 What is really wrong here is:
1) They lied
2) They covered up their lie by putting the DA seal on a door going nowhere (inside city hall; below) 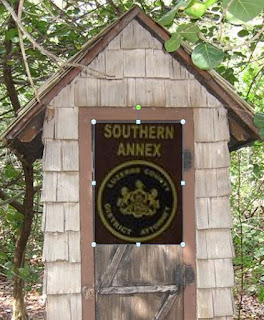 The County Seal may just as well have been put on on an outhouse
because there is no ASST DA or County Detectives working behind wooden doors pictured below (Locked doors and no lights).
(Confirmation from DA office itself that there is no annex office) 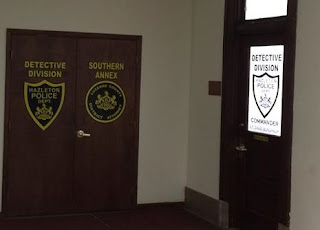 (Standard Speaker article HERE)  From article:  Hazleton Police Chief Frank DeAndrea continues to work on renovations on the third floor of City Hall - the new home of the detectives' division.

But the space will also serve as a satellite office of the Luzerne County District Attorney's office. "District Attorney Stefanie Salavantis loves this county and she recognizes an assistant district attorney and county detective need to be in southern Luzerne County," DeAndrea said. "It's no different than when the courthouse annex was here. "On a daily basis, there will be a county detective and an assistant district attorney here."

Salavantis already has her people in the Hazleton area every day but without the benefit of a base of operations, she said. The satellite office in City Hall will give them a place to work without driving 25 miles back to the courthouse in Wilkes-Barre. (Note: This makes no sense… are they going to stay in a hotel in Hazleton?  … or were two people moving to Hazleton?)

"It'll be the southern annex of the district attorney's office," Salavantis said. "As large as our county is, it's important that we have multiple locations to help police departments from all over and have police officers on the streets where they should be."


READER COMMENT TO ARTICLE:  I hope that no one is buying this. I'm upset that our police chief is playing politics - it's well known that Chief DeAndrea is lining up one of those sweet $100,000 DA detective jobs. Stephanie is the worst District Attorney in Luzerne County history and now she wants you to think that there will be someone in an office? When she just complained to county council that she has no staff? This office is going to be as empty as the District Attorney's head.
Posted by WB Truth at 12:53 PM