I would like to continue to a discussion I began two days ago when I was rudely interrupted by a very creepy threat. I had started a discussion on the bigotry that still remains regarding gays (“Cupcake and Gimpy”).

Please read this blog. It contains very important information for those who are gay or those who have a friend/relative who is gay. I am not gay – but I introduced myself to gay issues when I volunteered at an AIDS clinic in Florida.

TWO TOPICS
1) “REPARATIVE THERAPY” DOES NOT WORK !!
2) What the BIBLE says about homosexuality. 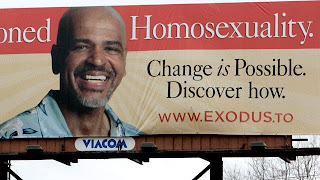 Exodus International, a 37 year ministry, has decided to close. Exodus International was held by church leaders world-wide as the standard bearer for converting transgender people to their “appropriate” gender identity. Church leaders have clung to this organization  as “proof” that homosexuality is a choice. Now its founder, Alan Chambers, is in effect calling the ministry a sham. All they have accomplished is saddling gays and lesbians with extraordinary guilt and shame. Some have even committed suicide. This is the shame.

HATE CRIMES (including speech)    It may surprise you who has protested against hate crime legislation. Leaders of the church. Why? Because such legislation may bar them from talking against homosexuality from the pulpit. Hopefully the closing of Exodus International will remove the scales from their eyes.

Jack Drescher, a Psychiatrist and a leading researcher of LBGT (Lesbian, Gay, Bisexual, Transexual), claims that conversion therapy is far, far outside the mainstream. He in fact places it on the planet Mars.

To his credit, Alan Chambers (of Exodus) did make an apology: "I am sorry for the pain and hurt many of you have experienced. I am sorry that some of you spent years working through the shame and guilt you felt when your attractions didn't change," Chambers said.  "I am sorry we promoted sexual orientation change efforts and reparative theories about sexual orientation that stigmatized parents.

Lev. 20:13    "If there is a man who lies with a male as those who lie with a woman, both of them have committed a detestable act; they shall surely be put to death. Their “bloodguiltness” is upon them"

My comment: These scriptures are from the Old Testament. But we live with a new covenant – the New Testament. God will not put anybody to death for sinning. Otherwise the sacrifice of Jesus was in vain. .


Romans 1:26-28   26 That is why God abandoned them to their shameful desires. Even the women turned against the natural way to have sex and instead indulged in sex with each other. 27 And the men, instead of having normal sexual relations with women, burned with lust for each other. Men did shameful things with other men, and as a result of this sin, they suffered within themselves the penalty they deserved. 28 Since they thought it foolish to acknowledge God, he abandoned them to their foolish thinking and let them do things that should never be done.

My comment: The key words here are “they thought it foolish to acknowledge God…” In other words, these people did not perform an act or two – but instead made it their entire lifestyle. Sex addicts perhaps. But harsh words in the New Testament does not just focus on gays.

Matthew 19:24 says, “I'll say it again--it is easier for a camel to go through the eye of a needle than for a rich person to enter the Kingdom of God!"

My comment: Is there an outcry against wealth in the church? Of course not. Like the references to lust in Romans 1:26-28, it is the excessive love of money that is bring warned against here. It’s the love of money that crowds out everything in our lives – including our faith in God.

My comments: Again, like the scriptures above, this is allegorical. In fact, these verses put homosexuality on the same level as those who are covetous or who have fornicated. The fact that the homosexual element has been pulled out of these verses to the exclusion of other sins id indicative of prejudice in (many, not all) our churches.


Like Romans 1:26-28, it is those who become completely consumed by these sins to the exclusion of God that need to worry.


Let’s take them one at a time:

Fornicators?    Who among us has had premarital sex outside of marriage?


Idolaters?    Who hasn’t pursued idols? Idols are people we put on a pedestal. This could be a romantic interest, a sports or rock star, or even a charismatic preacer.


Adulterers?  We certainly know many of these. Will they be banned from the Kingdom of Heaven? Only if they push God to the side.


Effeminate?    This likely refers to gay men. But according to these verse – it has the same standing as other sins.


Thieves?    Ever take a pen from work? Ever take anything that didn’t belong to you?


The Covetous?    Capitalism is based on coveting. We covet a greater salary, a greater standard of living, a “better” life for our kids, higher stock prices. We covet good heath… even a good looking mate.


Drunkards?    Addiction and alcoholism is an anathema to faith. But there is hope in recovery.


Revilers?    This refers to abusing people with nasty words. To vituperate. “Cupcake” would be an example.


Swindlers?    This unscrupulous trickery to defraud others. Too many names to list here.
Posted by WB Truth at 10:55 PM