PART 4 of 4  (scroll down to see earlier parts)

Thom Greco should be hailed as a hero for standing up to the “city gang bangers.” 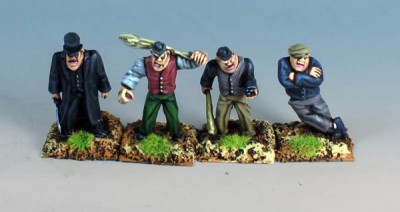 Thom Greco... you started this lawsuit well before all the corruption that we now know of. You stood for what is right and true and for this… I salute you. You once stood alone. Now you have an army behind you. I know I will support the restaurant you run (Oysters in Genetti’s).  If others feel strongly about justice and civil rights– I hope that they too will support you.

Summary of Counts (against city)
Count1 (City)    § 1983 & 1985    Violation of 14th Amendment (Equal Protection under the law) bars selective enforcement and provides that business be treated as others similarly situated. The Mines was subject to far harsher law enforcement than similar business (to say the least)

Count2  (City)    § 1981 & 1982    The Supreme Court has noted that these statutes protect an individual (Greco) who suffers retaliation by virtue of  protecting others from racial discrimination (The “Mines” patrons).

Count3 (City)    § 1985    What is alleged here is a conspiracy motivated by discrimination to deny equal protection.

Count4 (City)     14th  Amendment claims of alleged abuse of police power in order to destroy Plaintiff’s (Greco’s) business along with harassment and stigmatization of business.

Count5 (City)    14th  Amendment due process clause prohibits law enforcement from depriving “any person of life, liberty, or property without due process od the law.”  It bars arbitrary and wrongful govt actions. This deprivation of liberty rises to the level of “shocking the conscience.” (see below)


JUDGE CAPUTO’S RULING   Plaintiff Thom Greco’s above civil claims will be upheld (to proceed with) against the following parties below.

WHAT IS “SHOCKING TO THE CONSCIENCE?” (see Count 5)

1)     It is governmental conduct intended to injure that is most likely to rise to conscience-shocking level.

2)     Allegations of corruption, self-dealing, or bias against an ethnic group suggests conscience-shocking behavior.


3)     The merits of the city’s conscience-shocking actions was upheld by virtue of Federal Judge Caputo’s allowing the many counts above to proceed in court.

Questions citizens should be asking:

Based on the counts above, how can we describe our city leaders?    Racist thugs

Who is paying the 5 attorneys to cover for this "conscience shocking" racist thuggery.?
Who do you think?

NOTE: 7/15/2013  I submitted this Right-to-know request for:   The retainer paid, the cost to date, and the payments made to date in regards to Civil action NO.  3:11-617 to Donald H. Brobst and/or Thomas J. Campenni and/or the Law offices of Rosen Jenkins and Greenwald.

Put yourself in Thom Greco’s shoes. 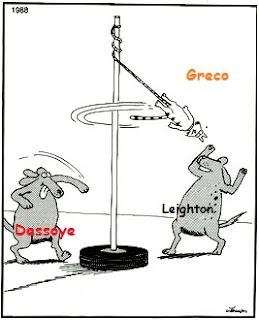 A “supposed” friend (Greg Skrepenak) asked for Greco’s restaurant experience to open up the restaurant/bar “Big Uglies.” Greco procured glassware, equipment, and TV screens for Skrepenak expecting to be paid back. He was only partially paid for these items. Greco was understandably angry. He chalked up “being stiffed” to a business loss. 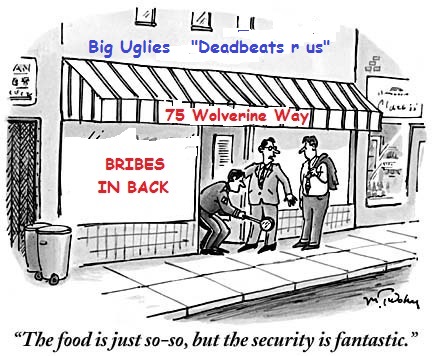 So who is the criminal here?

Greco? Bingo. He was charged for the felony of “imprision.” He was guilty of not filing charges against Skrepenak – a politician - who cheated him.

“Being stiffed” could be seen as a roundabout way of bribing a politician.
“Being stolen from” could be a way of providing value to someone. 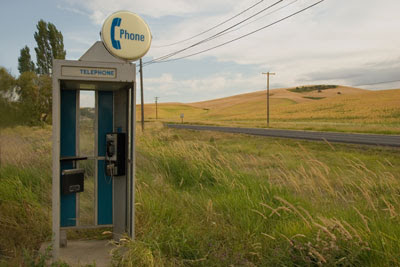 This most certainly was not Greco’s motivation. He was genuinely angry for being cheated. FBI Agent Joe Noone was also cited as one who made the charges happen.

Misprision of felony  -   Concealment or non-disclosure of someone else's felony

Commentary:  "In fact, whatever the law may be, it is not the general custom to prosecute for misprision of a felony, even where a person knows of a felony and is questioned by the police and refuses to make a statement. Indeed, Stephen, writing in the 19th century, regarded the offense as practically obsolete. American courts have refused to recognize it as subsisting. But there have been four successful prosecutions in England during the last quarter century."

This ridiculous charge was used against Greco to turn people against him. More dirty tricks


In addition the following occurred:

These companies addressed the provision of broadband development and geothermal cooling and heating.

Governor Rendell and local Rep Eddie Day Pashinski both supported these efforts. Leighton indicated he may provide economic and tax benefits as part of the KOZ zone (Keystone Opportunity Zone).

Cutting to the Chase… Leighton, Dessoye, and Butch Frati (Director of City Opersations) turned on Greco and turned others on him as well (including Pashinski). The obsolete charge of misprision was dusted off and imposed upon Greco (see previous days’ post to see how amazing this was).

Basically what we have here is a gang war. A gang of city thugs against one man. In an upcoming post I will account for other dirty tricks done to other activists. It is all coming to light. This I promise you.


I have more details from yesterday's post where I spoke on the illegal police raid on a private business (“The Mines” nightclub) that broke no laws.

PLAINTIFF: Thom Greco, The “Mines” nightclub and other companies 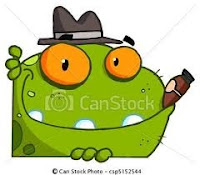 The “wrong crowd:”   Look at the list below. Is it just me… or do you too find it interesting that 12-18 people from the same school and/or heritage would find it difficult to accept patrons of a bar who "aren't like them?" Is the "wrong crowd" the 35% or so that were black or hispanic?

I won't mince words. There is a word for it.
It is called RACISM!
Free Enterprise? The "Mines" nightclub is also called competition. It is competition for other bar owners who kicked money to Leighton's coffers. Leighton did not like this... so he and Dessoye assaulted the "Mines" with 30 police, dogs, a SWAT team, and sheriff deputies. 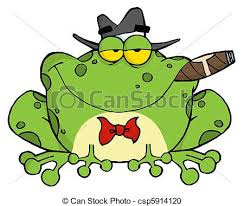 … and this doesn’t include (Irish Catholic council members Kane, Barrett, and Merritt)

I don’t have first-hand knowledge that County detectives Mike Dessoye or James Noone were involved… but it stretches the imagination that the head Detective of Luzerne County, Mike Dessoye, would stand by and watch his brother Gerard Dessoye to commandeer an army of cops, SWAT team, sheriff deputies, and dogs without his blessing of the county detective office and/or the DA office.

Peter J Smith of the the US Attorney office received a letter from Greco. Greco described a "City of Wilkes-Barre shakedown" in which high-ranking city officials threatened to shut down a party at the nightclub unless he hired two off-duty firefighters as safety officers. A day after Greco's letter surfaced in late February, the U.S. Attorney's office debunked his shakedown allegations saying the information provided, "does not provide a basis to open a federal investigation."


THINK OF THE SCAMS THAT COULD HAVE BEEN PREVENTED
IF ONLY FEDERAL OFFICIALS LISTENED!

In the Scranton office of the FBI, Joe Noone’s involvement is concerning. I have never met Agent Noone - but I would be less than genuine if I didn't wonder if he could, or even if he's being asked to, go from being decidedly pro leighton/Dessoye and now turn and see them as the perpetrators that I know they they are. Here is a piece from the lawsuit memorandum....

“Mayor Leighton and Chief Dessoye induced FBI Agent Noone to manipulate Mr. Greco into becoming vulnerable to the charge of misprision. Mayor Leighton and Chief Dessoye were friends of Agent Noone and like him, were alumni of King’s College. They acted in retaliation to Mr. Greco for threatening a civil rights lawsuit against the City based on the police harassment of “The Mines.” As a result of Agent Noone’s efforts, Mr. Greco pled guilty to misprision on about November 10, 2010. He was sentenced to two years probation and fifty hours of community service and was fined $10,000.

More tomorrow…  Homework assignment = Look up "misprision" in Black's Law Dictionary and see if you don't find it more than strange that ANYONE could be charged with a crime that is now considered obsolete in the U.S.  So obsolete that LCB officials had never heard of it!!!!

Yes... this actually happened. Here in Wilkes-Barre. What is almost comical (if it weren't so serious) is how Police Chief Dessoye (and others) selectively enforce the law.

Drug house with his "heroin honey?"  Stay open if you wish.
The "Mines" night club with "the wrong clientele?"  Take it down as part of a military assault. 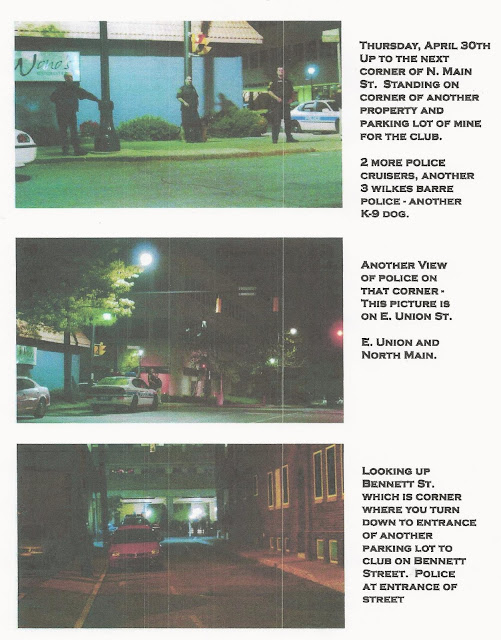 “THE WRONG CROWD”   It is important to note that nobody is actually arrested or cited. Cops are given orders to intimidate Their job is simply to scare patrons from coming back to this lawful establishment. This is a monumental abuse of police power with few parallels. 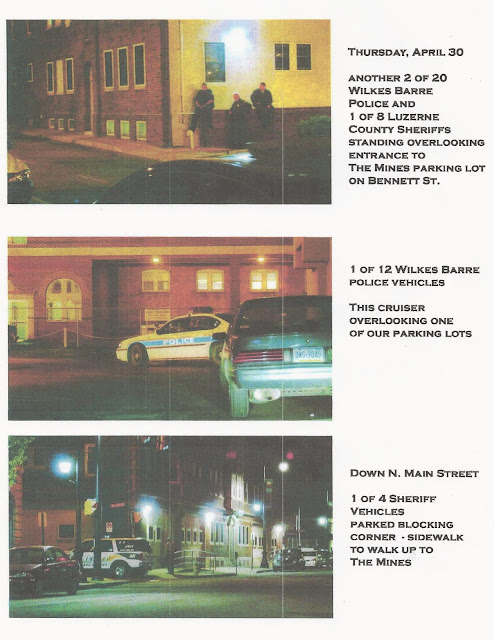 The lengths the city went to shut down a perfectly legal business will bring back images of water canons and dogs in 1960’s Alabama. 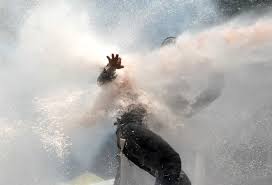 Dessoye state that “The Mines was not a “good mix” with King’s College (across street) and that it “attracted the wrong crowd.” Approximately 35 % of customers were black or Latino. This night club had an extremely limited number of disturbances – fewer than a typical night club. This fact has been confirmed by others in the crime prevention population. 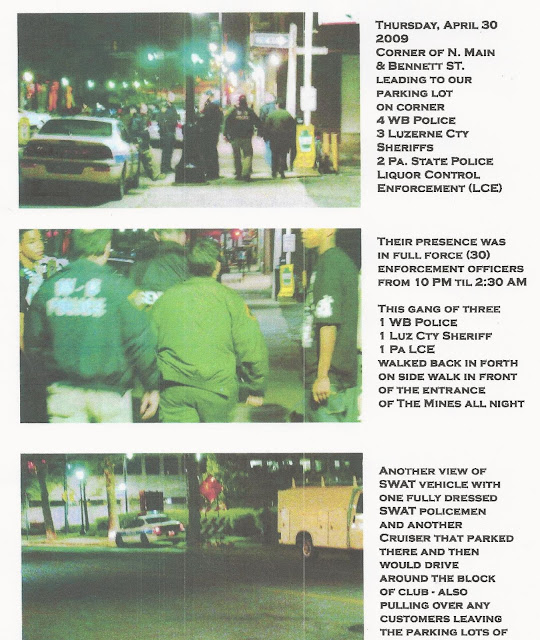 Yet the cronies who own the Hardware bar, Rodano’s etc… avoid any interference. In fact, the wife of (Dessoye/Leighton) owns the Uptown II.

-          Kings’ students were instructed by a King’s official (McGonicle) to file LCB complaints.
-          King’s President Father O’Hara said the bar had the “wrong mix” and the “wrong crowd.”
-          The Chair of Criminal Justice at King’s falsely reported there had been drug busts at the Mines and that they lost their licenses 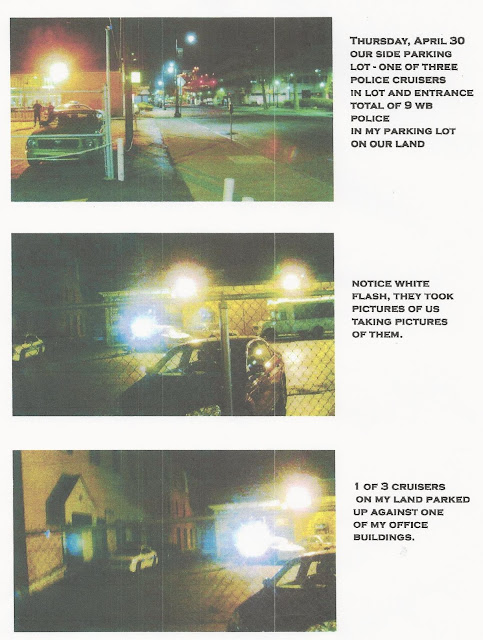 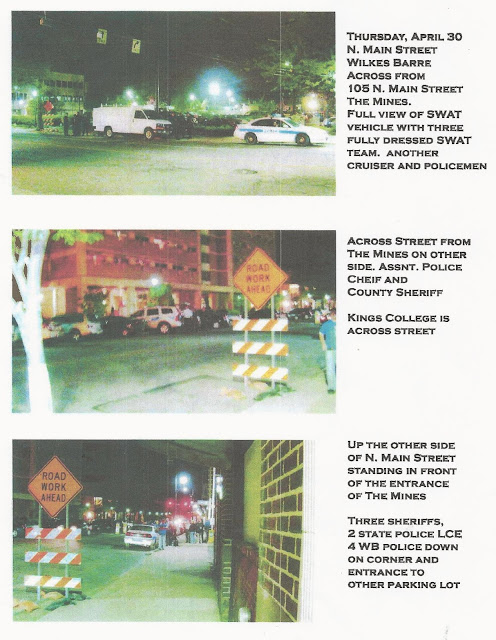 May 15-16
Police set up seat belt checkpoints in front of the Mines for 2 nights. 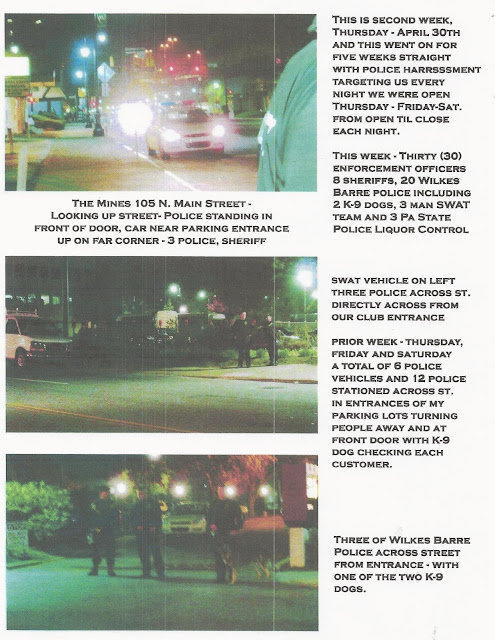 Source for this post: Legal memorandum (Civil Action NO. 3:11-617) heard before Federal Judge Caputo
Posted by WB Truth at 5:36 PM